The Curation Arena facilitated Curation-in-Action, a shared curating experience between two people. The process allowed for photo sharing of shared adventures. Each user had a tangible interface which enables them to navigate the content individually. The user interfaces did not prescribe the curation behaviour such as, the speci c number of photos to be shared. To retain focus on the shared story and to promote reciprocal sharing in the Curation Arena, the content from both participants was juxtaposed on the shared screen to form a collage of what they wanted to show to each other.

To implement a reciprocal photo sharing experience, no distinction
or hierarchy was made between different users. The tablet interfaces were designed to be identical: it is only the social interaction which determines if the user’s current role is, for example, ‘narrator’ or ‘recipient’ of content. Curation-in-Action and what appeared on the shared screen were often determined by the conversation taking place in the curation arena throughout the process.

With special thanks to Jesús Muñoz Alcantara for his invaluable help in realising the Curation Arena. 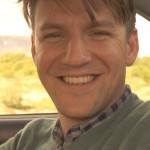 Mendel Broekhuijsen has a background in Industrial Design, with both Bachelor and Master degrees obtained from Eindhoven University of Technology. His graduation project about the Future of Nostalgia was concluded with the design of an application that enables people to create a personal collection of memory-inducing music. He continued to work on his passion for the value of digital media in his PhD project, supervised by Elise van den Hoven & Panos Markopoulos, which he completed with his defence on October 22, 2018. Since February 2018 he works as Senior Innovation Engineer at Qwiek. 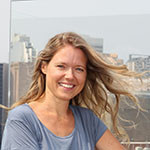 Elise van den Hoven has a background in human-computer interaction and interaction design research and studies how to Materialise the digital in everyday environments through tangible and physical interaction. Her favourite range of application areas has to do with Memories, in particular supporting everyday human remembering activities. That is how she came up with this project and its name: Materialising Memories. Elise is professor in the Faculty of Engineering and Information Technology of the University of Technology, Sydney, Australia, and associate professor in the Department of Industrial Design of the Eindhoven University of Technology, The Netherlands. In addition, she is associate investigator at the ARC Centre of Excellence in Cognition and its Disorders and honorary senior research fellow at the Duncan of Jordanstone College of Art & Design, University of Dundee. 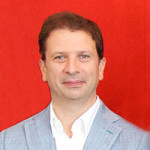 Panos Markopoulos studied electrical engineering and computer science in the National Technical University of Athens and human-computer interaction in Queen Mary University of London. He is currently a professor in the Department of Industrial Design of the Eindhoven University of Technology on the topic of Design for Behaviour Change. His interests extend in several areas of the fields of human-computer interaction and interaction design such as model-based design, privacy and trust, social games for children, evaluation methodology for children, connectedness between family and friends, persuasive technologies, and healthcare.

Data and other documents